Mahadev Temple, situated at the Mahadev Hills, is a famous temple dedicated to Lord Shiva. The temple is at a distance of 10 km from Pachmarhi, a hill station of Madhya Pradesh. It also has a pool of natural water, a naturally formed shivling and a pathway for the pilgrims to ease the walk. The hill also has some caves in which the Pandav brothers of theMahabharat had lived during their exile. Mahadev Temple also hosts an annual fair, Shivratri Mela, on the second last day in the month of Phalgun in the Hindu calendar which falls on either February or March. It is held in reverence of Lord Shiva and on that day, the pilgrims carrying tridents climb up the hill and plant those tridents on the top of the Chauragarh Hill.

Bada Mahadev, a prominent religious shrine, is about 10 kms. from Pachmarhi. It is to be found in at 15’ long cave where water droplets ooze out from the rocs constantly and collect in a pool. This shrine has a connection with the killing of the demon king Bhasmasur by Lord Shiva. 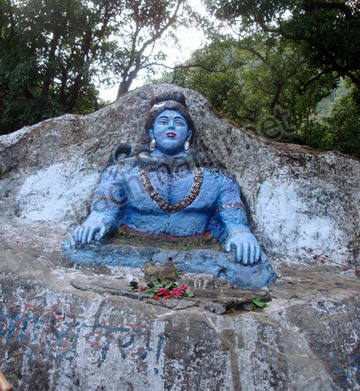 The Jata Shankar Temple Pachmarhi is one of the most revered holy places in Pachmarhi. This temple is housed in a natural cave and is an interesting visit for those who are religiously inclined as well as for the nature lovers. A sacred cave under a mass of loose boulders in which the Jambu Dwip stream has its source. A rocky formation of this place resembles the matted locks of Lord Shiva, hence the name. Its about 1.5 kms. away from the city, it requires a trekking of half a kilometer downwards from the road-end. It presents a natural, rock structure of Sheshnag, which attracts devotees from far-off places.